In August 2017, two people were killed in Albuquerque, New Mexico after a driver fleeing the police in a stolen vehicle slammed into a tow truck and burst into flames. A third died weeks later from the injuries she sustained in the car crash.

In November 2017, a seven-month-old boy and his two-year-old sister were killed in Evansville, Indiana when a driver blew through a stop sign while attempting to evade police in pursuit.  Their father, the driver of the vehicle the children were in, suffered severe head trauma and died weeks later.

In July 2018, six people were killed in Yankton County, South Dakota when a fleeing driver crossed over into oncoming traffic and collided head-on with a Nissan Sentra.  The fleeing driver, his passenger and all four occupants of the Nissan, including two children, were killed.

Police pursuits are among the most dangerous situations on U.S. roadways and are increasingly deadly for innocent bystanders.  However, the tragic examples listed above only begin to outline that danger.

From 2014-2018, fifty-six percent of people killed during police pursuits were someone other than the fleeing driver.

An analysis by the Fine Law Firm and 1Point21 Interactive found that there were 1,699 fatal crashes involving police chases from 2014-2018, killing at least 2,005 people – 1,123 were not the driver of the fleeing vehicle.

Among those killed were:

The death toll in police pursuit crashes increased in nearly every year of the study:

Where do the most police pursuit crashes and deaths occur? Who is most often killed? Is it worth the risk to public safety to chase suspects?  Our study examines the data to provide answers to these questions and more.

The 10 Counties with the Most Police Pursuit Deaths

Texas had by far the most total deaths of any state, with 268.  California had the most bystander deaths with 100.

*Bystander refers to anyone killed outside the fleeing vehicle or a police vehicle in pursuit.

In terms of ages, younger people are most often killed.  In fact, 57 percent of those killed were between the ages of 18 and 34. 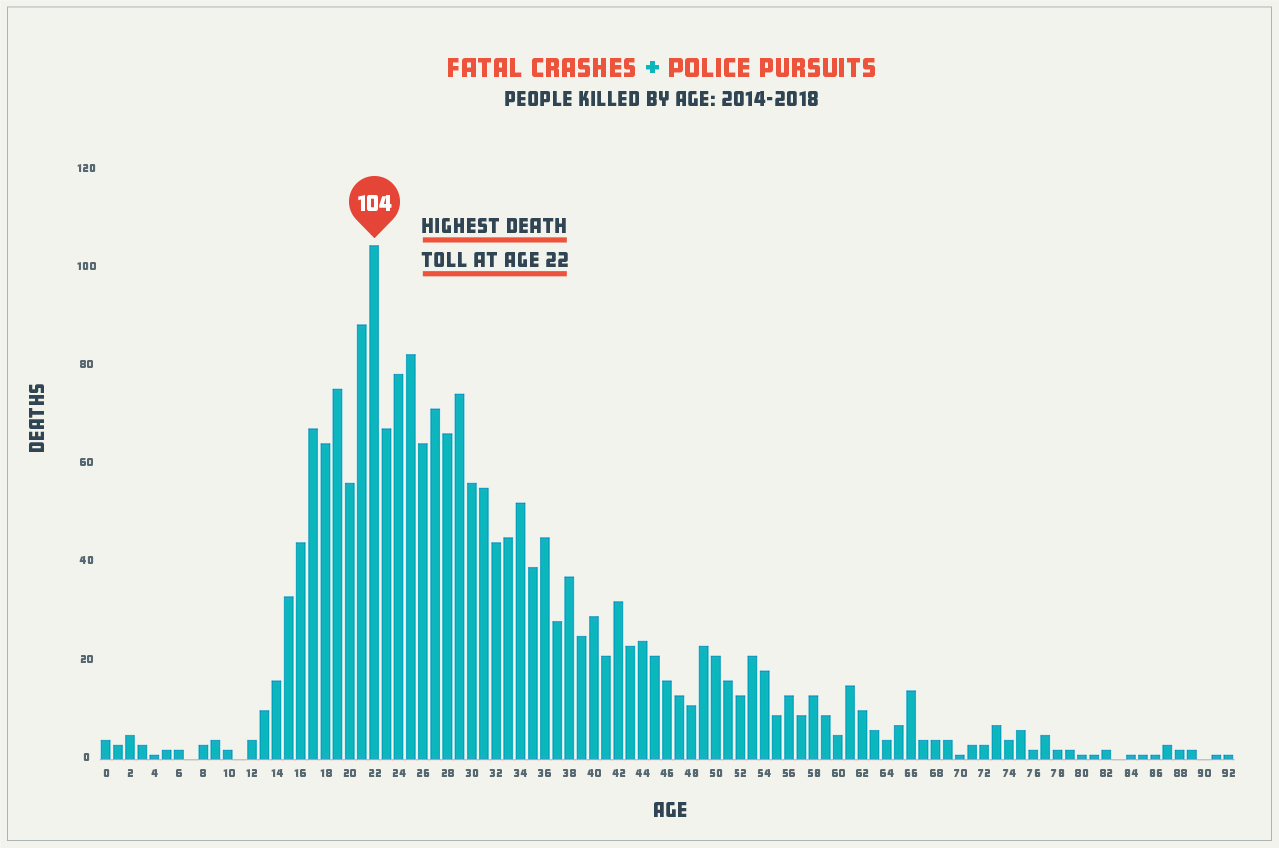 Is the Elevated Risk of a Chase Justified?

We have established that police pursuits are extraordinarily dangerous, but are pursuits necessary to catch violent criminals?  In most cases, no.

According to the International Association of Police Chiefs (IACP), as many as 91% of law enforcement pursuits begin in response to a non-violent crime. The IACP found that 42% involved a simple traffic infraction, another 18% involved a stolen vehicle, and 15% involved a suspected drunk driver.

This data suggests that apprehending a suspect may not be worth putting lives at risk in high-speed vehicle chases.

Yet, there is no comprehensive, national database on police chases.  The IACP report is based upon data for just under 8,000 police chases, a tiny fraction of the total – even for one year.  To put it into perspective, California reported 9,343 police chases in 2017 alone.

The Psychology of the Chase

If, as the IACP found, the vast majority of law enforcement pursuits originate with non-violent crimes, why do these chases occur at all?

The answer comes down to several factors, both psychological and physiological, that appear to affect fleeing drivers and chasing law enforcement officers differently.

According to Dr. Pamela Perez, PhD, a neuropsychologist, “fear clearly impairs decision-making. It causes us to fight, fly, or freeze. We lose our capacity to think clearly, rationally; we become reactive. Fear changes our perceptions of what is happening around us. We lose the ability to regulate our other emotions as well; we become more impulsive and often act inappropriately as a result.”

“Some have faulty beliefs about their rights and immediately jump to fear and feeling the need to flee,” Dr. Perez continues. “Others, members of certain races, for example, fear because they have heard stories in the media or friends or have had bad experiences themselves simply because of their race with law enforcement. Further, if drivers have unpaid tickets, drugs or drug paraphernalia, firearms, expired tags or driver’s licenses, etc., they may feel the need to run based on these issues as well. Finally, some people run simply because they have a reason to run, such as outstanding warrants or current involvement in illegal activity.”

This brings us to the question of “why do police officers chase”?

At the end of the day, a police officer’s job is to catch criminals and keep the public safe. When a suspect runs, it immediately makes officers believe they are guilty of something more than a traffic offense, for example. “Police officers tend to take it personally when someone runs from them when in actuality the person in question is running from ‘the police’ and not the officer him or herself,” explains Dr. Perez.

Once involved in a chase, police officers can hyper-focus on their target and completely miss the innocent bystanders and potential safety risks in the path of their chase. “This is a concept known as inattentional blindness – the failure to notice a fully-visible, but unexpected object because attention is so engaged on another task, event, or object,” says Dr. Perez. “Physiologically, as adrenaline soars, the frontal cortex goes offline and can exacerbate this issue.”

Our study analyzed fatal crash data from the NHTSA for the years 2014 – 2018, the most recent available year.

A Police Pursuits is defined by the NHTSA as “an event that is initiated when a law enforcement officer, operating an authorized emergency vehicle, gives notice to stop (either through the use of visual or audible emergency signals or a combination of emergency devices) to a motorist who the officer is attempting to apprehend and that motorist fails to comply with the signal by either maintaining his/her speed, increasing speed or taking other evasive action to elude the officer’s continued attempts to stop the motorist.”