Will the Other Driver Have to Pay My Medical Bills?

If you get into an car accident in New Mexico, it is important to recognize your rights as a victim. Depending on the factors involved in the case, you may not be financially liable for your medical bills or other losses, including lost wages, property repairs, and pain and suffering. Holding the correct party responsible for your accident takes understanding your state’s fault laws and proving the other driver’s liability. 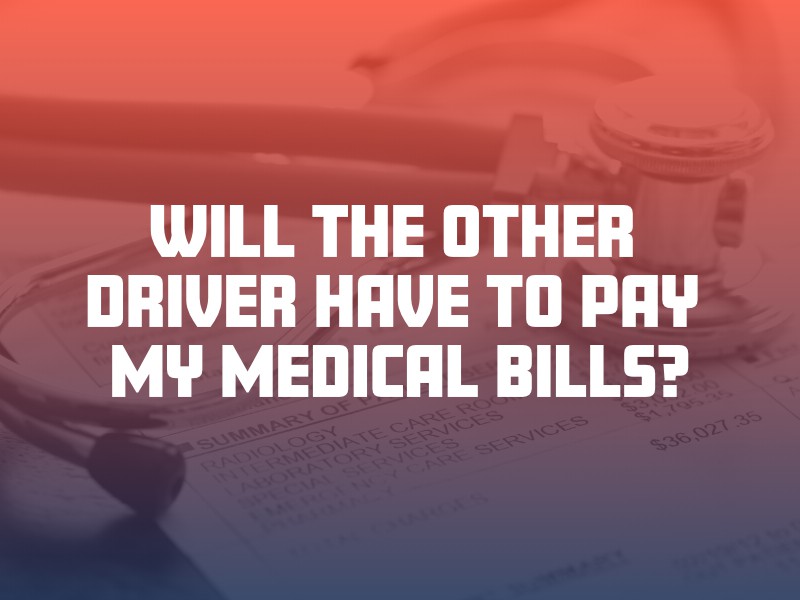 States either use fault or no-fault insurance laws. Thirty-eight (38) states use fault-based insurance laws, while only 12 use no-fault systems. New Mexico is in the majority as a fault insurance state. Fault systems, or tort systems, center on the idea that the at-fault party should be the one that takes financial responsibility for the accident. After a car accident in New Mexico, all injured parties will seek financial relief from the insurance company of the at-fault driver.

The other driver may have to pay your medical bills if he or she caused your car accident. If the other driver was guilty of drunk driving, driving distracted, cellphone use behind the wheel, speeding, reckless driving, failing to yield the right-of-way, or another wrongdoing that caused your collision, that driver may have to pay for your damages. The at-fault driver’s insurance company may offer you a settlement to cover your medical bills and other losses. You may have to prove the other driver’s fault, however, before an insurer will agree to accept your claim.

The adjuster will conduct his or her own investigation of the car accident to determine fault. If the company denies fault or refuses to give you a fair settlement, you may need a lawyer’s assistance in bringing your car accident claim to trial in Albuquerque. A personal injury trial could end in greater financial relief for your medical bills and other losses. You or your New Mexico personal injury lawyer will need to prove the other driver’s liability for your auto accident before a judge and jury, however, to receive a positive judgment award.

Proving the other driver’s fault at trial requires clear and convincing evidence demonstrating the defendant was more likely to be at-fault for your car accident than not at fault. While this is a lower burden of proof than the plaintiff’s side has during a criminal case, it can still be difficult to meet without a lawyer’s assistance. A lawyer can help you gather and organize evidence of the other driver’s fault, such as eyewitness accounts, police reports and photographs. If your lawyer succeeds in proving liability, the other driver will have to pay for your medical bills.

The other driver involved in your car accident might not be the only person liable for your injuries and damages. He or she might not be liable at all. Your case could involve the fault or misconduct of a third party, such as a vehicle manufacturer, employer, vehicle owner or the City of Albuquerque for an unsafe roadway. If so, the other driver might not be the one responsible for paying for your medical bills. A car accident attorney can look into your recent crash and help you determine the identity of the correct at-fault party. From there, your lawyer can help you bring a strong insurance claim or personal injury lawsuit for damages.